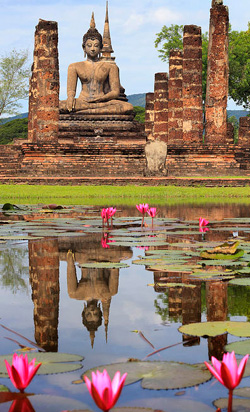 Because Sukhothai was the country's first capital city the region is steeped in history and known as the birthplace of the Thai nation. The most famous of over one hundred historical sites are the UNESCO World Heritage Sites of Sukhothai and Si Satchanalai and these are the main reason the tourists visit. The famous Loy Kratong festival originated here and every November, the moonlit waters provide an excellent setting for the candle lit ceremony. Many of the regional temples and monuments have been lovingly restored to reflect their former status. Another of the city's claim to fame is Sangkhalok pottery much prized by collectors the world over.

On the west side of the Yom River just over the Phra Ruang Bridge are many backpacker friendly hostels and budget hotels, and because of the stiff competition they offer some of the best value in Thailand. There has, in recent years, been a steady rise in the number of tourist oriented hotels being built directly to the east of the historical parks main gates. This trend appears to be continuing with more resorts being constructed offering a wider choice than ever before.

Without doubt this is the number one attraction and a definite must see for anybody interested in the history of Thailand. This very large park is probably best seen by bicycle (which can be easily hired) and will take at least a full day to explore. For the less energetic the ruins can be explored by motorized rickshaws, motorcycle or on foot with a tour guide. The area is divided into separate areas, the best of which charge separate entrance fees. The most interesting are the northern, western and central zones although you will be hard pushed to see everything in one visit.

This is a companion piece to Sukhothai Historical Park and has similar architectural ruins. It is smaller so more easily traversed. The best part is that Si Satchanalai is far less visited so you can find yourself virtually alone in the ruins. The setting takes on a whole new meaning when you stand in the middle absorbing the ambiance without crowds pushing by. Climb the difficult stairs to the big Buddha. On the way up notice the cranes nesting in the trees. A rare sight indeed.

Named after Sukhothai's most illustrious ruler, this museum is an excellent place to get an introduction to the ancient city before physically heading out to explore the sites. On display in this outstanding collection are early 20th century photographs of Sukhothai, taken well before any restoration, as well as a fine bronze walking Buddha that is considered the best example of its kind in the country 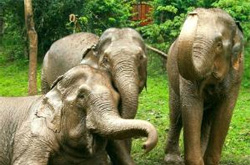 Set in an area of over 500 acres of forested land the sanctuary is passionately devoted to creating a natural and safe home for retired and rescued elephants. There are no gimmicks, tricks or performances, just elephants in their natural habitat .Founded by English animal lover Katherine Connor it has been voted as one of the top ten animal sanctuaries in the world. Staying guests not only interact with the elephants in this secluded and peaceful location but also get involved in daily life including repairing pens and collecting food. Do not expect all the comforts of home, accommodation is best described as rustic so if you don't like camping, bugs, vegetarian food and doing chores this is not for you. The elephants come first not the tourists. So popular is this venue that you have to book at least one year in advance.