It is difficult to determine the type of culture which existed in Thailand before the Christian era, since no written records or chronologies exist but archeological excavations in the area north of Nakorn Ratchasima indicate that there were people living here over 4000 years ago.

However, by the 6th century AD thriving agricultural communities were established from as far north as Lamphun to Pattani in Southern Thailand. Theravada Buddhism was flourishing, and probably entered the region around the 2nd or 3rd centuries BC when Indian missionaries were said to have been sent to a land called Suvarnabhumi. (An area comprising Burma, Central Thailand and Cambodia).

The Dvaravati period, a loose collection of city states, centred around the Nakhon Pathom area, and lasted until the 11th century when it quickly declined under the political domination of invading Khmers.

During the 12th century A.D. and is set on top of Phanom Rung Hill in Ta Pek in the Chaloem Phra Khiat District of Buri Ram province which is the location of a long extinct volcano. Phanom Rung is the original name and is mentioned in stone inscriptions excavated at the area. It is a religious site dedicated to the God Shiva, the supreme Hindu deity. It symbolises Mount Kailasa, the heavenly abode of Shiva.

During the 13th century several Thai principalities in the Mekong valley united and took Haripunchai from the Mons and the Sukhothai area from the Khmers. The Sukhothai kingdom declared its independence in 1238 and quickly began to expand. At its height the kingdom stretched from Nakhon Si Thammarat in the south to Vientiane in Laos, and Pegu in Burma. Sukhothai is considered by most Thai historians to be the first true Thai kingdom. King Rham Khamhaeng, the second king of the Sukhothai era, organised a system of writing which became the basis for modern Thai. He also codified the Thai form of Theravada Buddhism.

During the 14th and 15th centuries the Thai kings of Ayuthaya became very powerful and began to expand their kingdom eastward until they took Angkor from the Khmers in 1431. By the mid-16th century Ayuthaya and the independent kingdom of Chiang Mai had came under the control of the Burmese, but the Thais regained control of both areas by the end of the century.

Burma again invaded Ayuthaya in 1765 and fought a fierce battle with the Thais for two years before gaining control of the capital. During the process the Burmese destroyed large numbers of manuscripts, religious sculptures, and many temples.

The Burmese made no further inroads into Thailand and, in 1769, a new Thai capital was established at Thonburi, on the banks of the Chao Phraya river opposite Bangkok, by general Phya Taksin. The Thais quickly regained control of their country and began to further unite the provinces in the north and south of the country. 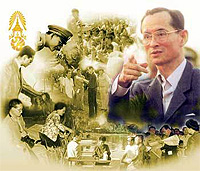 In 1782 king Rama I was crowned. He moved the capital across the river to Bangkok, and ruled as the first king of the Chakri dynasty. In 1809 Rama II, son of Rama I, took the throne and ruled until 1824. King Rama III (1824-1851) began to develop trade with China and increase domestic agricultural production.

When king Mongkut (Rama IV) took the throne in 1851 he quickly established diplomatic relations with European nations, while at the same time astutely avoiding colonisation. He also began a period of trade reform and modernisation of the Thai education system. His son, King Chulalongkorn (Rama V 1868-1910), continued this tradition with the modernisation of the legal and administrative systems, and the construction of railways. During his 15 year reign from 1910 to 1925 king Vajiravudha (Rama VI) introduced compulsory education and other reforms.

In 1925 the brother of king Vajiravudha, king Prajadhipok (Rama VII 1925-1935) ascended the throne. Seven years later a group of Thai students living in Paris mounted a successful bloodless coup d'etat which led to the establishment of a constitutional monarchy similar to that which existed in Britain. A key military leader in the coup, Phibul Songkhram, took power and maintained control until after the end or WW II. Rama VIII, Ananda Mahidol, became king in 1935 but was assassinated in rather mysterious circumstances in 1946. He was succeeded by his younger brother Bhumipol Aduldej who became Rama IX. His Majesty King Bhumipol Adujdej remains on the throne today, and he commands great respect in both Thailand and throughout the rest of the world.

Because Thailand was never colonised the country’s society and politics has been moulded by the Monarchy, the Buddhist religion and the military. Recent governments have been democratically elected although there have been several coups and attempted coups by the army, In 2006 Prime Minister Thaskin Shinawatra was ousted in a bloodless coup leaving the country split and in political limbo. Thaskin had widespread support in the poorer rural areas in the north but faced serious opposition from the urban elite. Elections in 2007 resulted in a pro Tasksin administration again but it lasted less than a year due to massive anti government rallies. The newly elected anti Taskin leadership lasted four years but faced huge pro Taskin protests. Elections in 2013 saw Taskins sister become Thailand’s first female prime minister. She caused controversy trying to have a political amnesty bill passed allowing her brother, who is in self imposed exile, to return, leaving the country deeply divided. In 2014 the Army once again seized power with the promise of elections to come.

In the Southernmost provinces of Yala, Pattani and Narathiwat there is a serious conflict which has been largely ignored by the worlds press. The population in these provinces are 80% ethnic Malay Muslims who want more autonomy for the region. This decades old strife stopped in the 1980’s but flared up again in 2004. Although the risk to tourists is low the British Foreign Office warns against visiting this region.