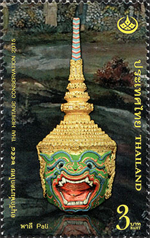 Bang Lamphu and Khao Sarn Road is an old area with a history dating back over two centuries. When you walk around Bang Lamphu and Phra Arthit road, you may be curious that century-old classic buildings in a colonial style coexist with modern westernised shops. Local people who cannot speak a single word of a foreign language share their community with tourists from around the world. Thai traditional food shops open next door to fastfood and guesthouse restaurants. Modest novice monks share the road with trendy backpackers.

The tales of Bang Lamphu date back over two centuries to the time when Bangkok was selected to be the next capital of the Siamese Kingdom. The first palace in Bang Lamphu belonged to Princess Chakjesda, brother of Rama I's Crown Prince Phrarajwang Bavorn Sathan Mongkol. Today the palace does not exist, only a part of a small wall has survived the modernisation, and this stands on Phra Sumen road opposite to Phra Sumen Fort.

Phra Sumen Fort is the hexagonal-shape concrete fort built in the reign of King Rama I. It was built along with 13 other forts to protect Bangkok.

Today it is one of two forts that have survived modernisation. When the fort was renovated a
few years ago, items found inside were collected and displayed in a museum on the top floor
of the fort.

Next to the fort on the eastern side is Wat Sangvej Printing School. This century-old building is the place that produced the early editions of the textbooks of Thailand.

Behind the building is the quiet Klong Bang Lamphu (Bang Lamphu Canal) which remains a good place to relax. The canal was dug during the reign of King Rama I in the year 1782 by 10,000 Khmer labourers. Pridi Phanomyong, Thailand's stateman, once cruised along this canal and distributed his leaflets on politics that led to major political changes later on.
Klong Bang Lamphu has many names according to different communities by the canal. It was called Klong Ong Ang (jar canal) by the jar producing community around the Internal Affairs Ministry. It was also called Klong Sapan Han, Klong Wat Cherng Lane, and Klong Pom (Fort Canal) when it ran around Phra Sumen Fort.

The Park houses the Santichiaprakarn throne, the only riverside throne. It was believed in the past that this whole area were covered with a Lamphu tree, hence it was called Bang Lamphu.

The Lamphu tree had long disappeared from the minds of local people until they found it again in 1997. This big tree is believed to be over 100 years old. The Lamphu tree has vertical roots that grow up to the sky. It enjoys growth on swamp land. It also a tree which fireflies love to gather on. 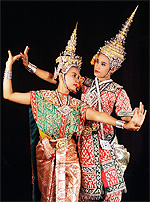 From the fort, many old palaces line along the Chao Phraya river. Next door to the park is Ban Chao Phraya which is now the Creative Centre. The beautiful European architecture was introduced by Prince Khamrob, whose sons MR Krukrit and MR Seni Pramote grew up in this mansion.

On the opposite side, beautiful Baan Phra Arthit always impressed local [people. This house firstly belonged to Chao Phraya Voraphong Pipat, and is the origin of the Isarasena family. Today it is well renovated and preserved.

Back on the river side, the Buddhism Society of Thailand's building was adapted from the Palace of Princess Manassawas Sooksawasdi. Next door, the Food and Agriculture Organisation of the United Nations: Regional Office Asia and the Pacific and Unicef's office are located on the site of the old palace that once belonged to Prince Naretvorarit, King Rama IV's son. Tourists can visit this beautiful place.

Next door at the end of Phra Arthit Road, house number 19 is also part of the palace. This house once was the residence of Pridi Banomyong. He used this house to set up the Seri Thai (Free Thai) group who fought with Allied forces during World War II.

Turning left onto Chao Fah road is Wat Chana Songkram, a Mon temple that was built in the Ayuthaya Period. It was previously called Wat Klang Na. The ancient style decoration and Mon's swan figures remain. King Rama I's Crown Prince had the site renovated and renamed as Wat Tong Pu. In 1787, the Crown Prince came back from war, took off his sacred vest and put it with the main Buddha image. The image was rebuilt and called Luang Poh Pu and the temple was renamed again into Wat Chana Songkram (war winning temple).

When you cross the road, cut through Rambutri road to the busy junction with Sipsam Hang road, curious visitors will find another attraction in Wat Bavorn Nivet Vihara. This old temple combines two temples together, including Wat Rangsisutthawas and Wat Mai. King Rama III built this temple and ask Rama IV to be the abbot here. Many Kings of the Chakri monarchy entered their monkhood in this temple. The Chinese style decoration on the roof mirrors the close relationship between China and Thailand during this period.